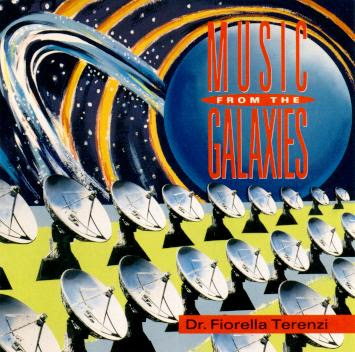 Described by Dennis Miller as "a cross between Carl Sagan and Madonna", astrophysicist, author, and musician Dr. Fiorella Terenzi received her doctorate in physics from the University of Milan, has studied opera and composition at Conservatory G. Verdi, Corsi Popolari and taught mathematics and physics at Liceo Scientifico, Milan. In research at the Computer Audio Research Laboratory, University of California, San Diego, she developed techniques to convert radio waves from galaxies into sound - released by Island Records on her acclaimed CD "Music from the Galaxies".
"In a new Island Records CD called Music from the Galaxies, Italian Astro- physicist and composer Fiorella Terenzi has used the most modern radio-tele- scopes and computers to convert the natural radiation from a galaxy designated UGC6697 into the audible range then add instrumental harmonies. A fascinating their largest efforts yet to scour distant galaxies for intelligence on that end." - Newsweek On-Air Radio
"A landmark release - an uncommon fusion of science and art, astronomy and music, known as Acoustic Astronomy" CNN, "Future Watch": "The source for this sound is a galaxy far, far away. How can we hear music from a galaxy? Well, our interpreter is Italian Astrophysicist Fiorella Terenzi." Dennis Miller: "We are going to jam with the galaxy, folks. Thank God I only did half a tab!"
A strange yet wonderful cosmic trip by a non musician but astrophysicist.Reminding the great Komische musik space releases!Highly recommented!
get it here
mutantsounds at 1:22 PM
Share