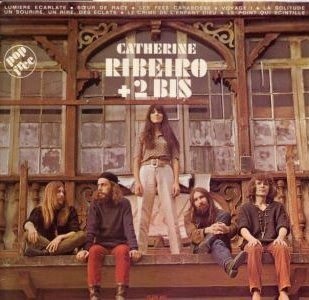 Biography
Catherine Ribeiro was born in 1939, the daughter of Portuguese immigrants. She starred in Jean Luc Godard's controversial film 'Les Carabiniers' aged 22, where she played a partisan. Here she met (and later married) guitarist and sound sculptor Patrice Moullet, the core member of the group they were to later form called Alpes. They released the first album Catherine Ribeiro + 2 Bis in 1969, but didn't use the name Alpes until the second album Nr.2. Her daughter Ioana was born sometime around 1971 and inspired many songs. Catherine is most well-known in France for her recording of Edith Piaf songs, but the music of Alpes under discussion here is much more revolutionary.
A review
I often say that the USA album is the greatest rock album made in the 60s, or that it's a toss-up between it and the VU + Nico album. Well, technically this album, more or less rock music I suppose we could say, was made in the 60s, and it makes the USA album seem like fluffy pop. I'm not saying that USA is at risk of losing its throne, but this a whole different breed of avant-rock royalty way off any scale we could construct. This is a holy grail of 20th century music. Never reissued, this needs to be heard by everyone even slightly interested in this aesthetic sphere.
It's misleading to call this rock music though, because rhythmically it doesn't use any conventional rock beats, and the percussion is used in a strikingly unusual way that gives a droney effect despite using a rapid stream of drum hits. That's drum, not drumkit. I don't think there's any drumkit used in this music. I suppose we could call this music "ecstatic psychedelic electric avant-folk music".
What's so amazing here is that the instrumental parts of the music are equally as idiosyncratic and startling as Ribeiro's bracing vocals. These people were from another planet. The avant-folk precursor to Magma.
Michael Anton Parker
IMHO just one of the 100 best records ever made!
mutantsounds at 12:54 PM
Share