The (Hypotetical) Prophets - Around the world with the (hypothetical) prophets ,LP,1982, France 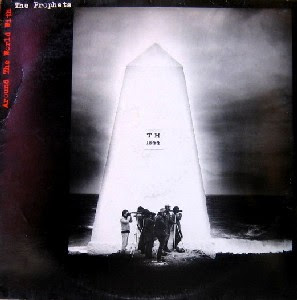 The (Hypothetical) Prophets was the result of the collaboration between Bernard Szajner and Karel Beer. The following text excerpt in regards to Karel Beer, from an article published in the Herald Tribune, Aug 2005 by Mike Zwerin: "When he was co-leader of the France-based group the (Hypothetical) Prophets, he and his musical partner, Bernard Szajner, both used pseudonyms, and they were always photographed with their faces covered. Beer's father was traveling to Eastern Europe on business, and his family was Czechoslovakian and there were relatives still living there. "It was as though the Hypothetical Prophets had something against the Soviets," which, Beer says with a straight face, "was not really the case." The lyrics, in Russian, on one Prophet track were "the directions of how to build a nuclear reactor and what can happen if things go wrong," Beer says. "This was before Chernobyl. The information was already, you know, around. Another song listed Russian gulag railroad stations, where more people got off than got on. We could feel that there was some interest in 'certain quarters." Karel Beer today also says: “In the '80s I produced various records and started the Initial Recording Company, an indie label, and was in a fictitious group called The (Hypothetical) Prophets who signed with Epic in 1982. Currently I have a recording studio and promote stand-up comedy shows and concerts in Paris"
http://minimal-wave.org/site/modules.php?name=topMusic&op=bio&idartist=64
Another great minimal electronics LP, by the pioneer of of the genre Bernard Szajner!
mutantsounds at 6:39 AM
Share