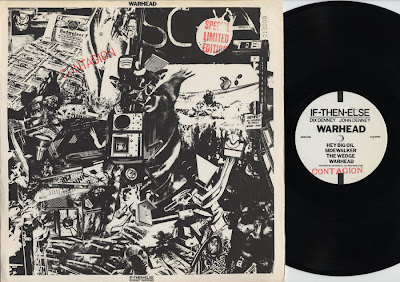 The Weirdos were part of the original wave of American punk rock from Los Angeles in the late 70s. They were DIY to the bone and not afraid to experiment with ideas of how things were supposed to be done. While purely inspired by the punk rock of London (and NYC), they did not choose to merely follow that path for their whole existence. If Then Else was the short-lived experimental side project of John and Dix Denney, the brothers who founded the Weirdos and boy is it ever a wild departure.
Much like the Residents or Einsturzende Neubauten or music concrete, their's was not a music of instruments as much as it was of sounds. Washing machine percussion loops, tape slices, dying synths, and feedback. And it seems they had an agenda as well. The LP artwork is a chaotic black and white collage of weaponry, corporation, and slices of modern life reassembled as Wheres Waldo's nightmare. Song titles like Hey Big Oil, Warhead, and Destruction makes it sound like they weren't all that please with some things going on in the world. The LP,Warhead, was put out by Contagion Records in 1981 and the name of the band, If-Then-Else, hints to the dystopian robotic future philosophy where emotion is stripped out and we only follow computer logic!
Another crown jewel of minimal electronics,yet avantgardish early 80s scene!
mutantsounds at 3:35 PM
Share