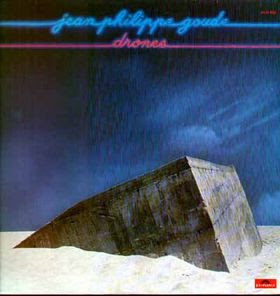 Jean-Philippe Goude came into the world in Paris on July 27th 1952. In spite of a most favorable family context - his mother being a violinist and his father happily devoting himself to the piano -, it wasn't until the age of ten that Jean-Philippe discovered piano playing when he started his classical music studies. Two years later, however, he was forced to abandon his instrument, after moving house. He started again to practice by himself, another two years later. Yet, he soon lost interest in classics and began to play with bluse rock bands, before going back to classical music once again and discovering the jazz scene by the agency of Paris' American Culture Centre. Anyway, he quickly considered the jazz world of too little interest.
At the beginning of the seventies, whilst starting musicology studies at the university of Paris 8(Vincennes), he discovered the minimalist movement through the work of its main exponents: Phil Glass and Terry Riley. This gave him insight into unexpected perspectives, encouraging him to work flat out. To that end, he enrolled at the Pantin Acdemy of Music, where he studied harmony, counterpoint, musical analysis and orchestration under the direction of Irene Jarsky.
Parallel to these activities, Jean-Philippe was able to develop his talents as a composer within a group called MADAME BERTRAND, an outfit which at the time was eventually reduced to the duo of percussionist Olivier Cole and Jean-Philippe himself on keyboards, helped out by electronics wizard Francois Gingle, who modified his synthesizers in order to obtain the weirdest sound. Under this formula, Jean-Philippe released his first album, called "JEUNES ANNEES" in 1975, a record for which he had written all compositions. Nonetheless , the release of the album resulted in the disbanding of MADAME BERTRAND.
A few months later, Jean-Philippe, strongly recommended by ZAO's drummer Jean-My Truong, joined Bernard Paganotti's band WEIDORJE in which he shared keyboard duties with Patrick Gauthier, until 1979. Even if his stint with WEIDORJE proved extremely fruitful musically speaking, he felt tired of many setbacks, due to the fact that the band couldn't live on its music alone, and left shortly before WEIDORJE broke up in favor of more studio work.
During his stay with WEIDORJE, Jean-Philippe had made friends with the home guitarist of the RAMSES studio, Alain Ranval, when the band was recording a demo at this renowned studio. Afterwards, Alain asked him to write arrangements for the debut album of ODEURS, the beginning of a successful collaboration with the RAMSES team; Jean-Philippe, in turn, resorted to the studio when he made plans to record a second solo album under his name, after WEIDORJE had disbanded.
"DRONES", as the album was called, was recorded in 1979, featuring the most impressive bunch of musicians one could dream of. The music on this album was drawn from pieces rearranged from another album, an occasional work called "SUR UN AIR DE GYMNASTIQUE"; this was intended for a gymnastics federation and had been issued a few months before. The WEIDORJE influence is still evident on some numbers such as "Les Saturnales" or "Dies Irae", yet Jean-Philippe takes the music way beyond the Zeuhl trend and offers a very personal approach, which obviously contributed towards the album's success and its cult status until today.
After the release of "DRONES", work was rolling in from all parts; initially, Jean-Philippe collaborated on ODEURS's first three albums; then he worked as an arranger and artistic director with the singer Renaud for five albums; finally, he made his debut as a film soundtrack composer, together with his old mate Alain Ranval in "VIENS CHEZ MOI, J'HABITE CHEZ UNE COPINE", "CIRCULEZ Y'A RIEN A VOIR", directed by Patrice Leconte, "ELLE VOIT DES NAINS PARTOUT" and "LE PREFERE", not to mention intensive work in the field of music for advertising. This period of feverish work, mainly done to earn a living, as Jean-Philippe was forced to shelve his own musical asperations in the meantime, lasted about 1986.
From this time on, he worked alone in sound illustration exclusively, except for a collaboration with Maurice Dugowson on three new soundtracks: "CHANTONS EN CHOEUR", "PUZZLE" and "COMME PAR HASARD"; he also specialized in signature tunes for TV series (TAXI, PERMISSION DE MINUIT, which earned him a gold award of the BDA in Los Angeles, 1989, "A LA FOLIE", "QUAD JE SERAI GRAND", "TRANCHE DE CAKE", "MY TELE IS RICH", "CARACTERES", "GIGA", "HORS SUJET", "FAUTEUIL D'ORCHESTRE", "TRANCHE DE L'ART"...) and designed numerous television broadcasts for FR3, La5, RFO, A2, CANAL J and CINE CINEMAS.
Since 1987, as he didn't want to be recognized only as a library music performer, he decided to assert himself as a personal composer, working under his own name on a new album which was eventually released in June 1992, entitled "DE ANIMA". This ambitious work presents an extremely refined music, at times close to contemporary chamber music, which successively alternates lighter with sharper pieces, sometimes solemn, sometimes more introvert, yet always thoughtful, evolving towards a world of inner peace and gentleness, as emphasized by the soft sounds of strings, basson or clarinet.
Nowadays, Jean-Philippe works on yet another album, in search of the sheer essence of music, ensuring continuity in the manner of his previous efforts, for the benefit of his many admirers.
as requested
get it here
mutantsounds at 6:03 AM
Share