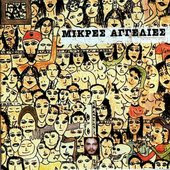 Michalis Siganidis was born in Thessaloniki in 1958. He started to play guitar as a child and then studied double bass and mandolin at the State Conservatory. He writes poetry and songs. In 1979 he started to collaborate with Sakis Papadimitriou, Floros Floridis, Theodoris Rellos and other musicians of jazz and improvisational music. He is a member of the famous group "Winter Swimmers". He composed music for short films and theatrical performances and he orchestrated the music for two records: " Ichnilates tou Ioura" (songs from the Hebrides) and "O Ilios kai to Fengari" (The sun and the moon). Except for his participation in the records/CDs of the Winter Swimmers and the CD of Wutu Wupatou, he published: "Mikros Aderfos" (Little Brother), "To Proi kai to Vradi" (In the Morning and the Evening) and "To Traino Fantasma Filo" (The train Ghost Friend), "Mikres Angelies" (Small advertisements or announcements) and recently with his newly founded group "Sygrotima Lambrakis" or "Lambrakis Complex" he released the CD "Basse Classe" (Lyra).
EXCELLENT Greek improvisation recording with jazz,RIO,rempetika influences by one of the legends of the Greek jazz/impro scene.
HIGHLY RECOMMENDED!
get it here and here
mutantsounds at 11:06 AM
Share