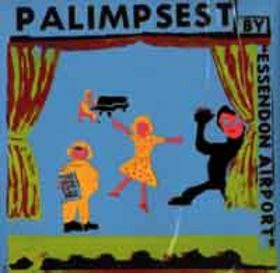 Essendon Airport was an Australian post-punk group from 1978-83 who explored experimental minimalist, electronic and funk music. They reformed in 2003.
Based in Melbourne, Essendon Airport began as an instrumental duo in 1978 with Robert Goodge on guitar and David Chesworth on Wurlitzer electric piano along with a home made drum machine bought from the Trading Post. Both members lived in or near the suburb of Essendon and took the name of Essendon Airport which since 1971 was no longer an international terminal (replaced by Melbourne Airport).
They later became a four piece adding drums - Paul Fletcher, and saxophone - Ian Cox, and finally a five piece with bass player Barbara Hogarth in 1982. The group disbanded in 1983. Each of these three line-ups produced quite different music. Essendon Airport performed around Melbourne's newly emerging post-punk inner-city venues such as The Crystal Ballroom, various galleries such as the George Paton and the Clifton Hill Community Music Centre (CHCMC), a venue for experimental music, performance and film during this time.Duo 1978-79The duo released the EP Sonic Investigations of the Trivial and the single Talking To Cleopatra with Anne Cessna both on Innocent Records.
Their EP was described at the time by Essendon Airport as .... songs which combine many of the most facile and insipid kinds of music in a redeemingly dignified manner.... creating new trivia out of old. All this takes place along with a kind of pedantic fetishism for small-repetition games - the music travels in circles, spirals and solid blocks of sameness and difference. This manifestation of Essendon Airport is perhaps less well known than the later ones but played some memorable performances around Melbourne including the Clifton Hill Community Music Centre and supports in front of bemused punters waiting for Midnight Oil and Jimmy and the Boys.
Quartet 1980-81Embellished with the arrhythmic drumming of Paul Fletcher and the often sweet, often brittle saxophone of Ian Cox. The four-piece performed a range of material from extreme minimalism to plundering the hidden resonances of the popular song. Examples can be heard on the album Palimpsest (Innocent Records). The group also made recordings for Fast Forward Magazine and a disc give-away for the Art Network Magazine.
Quintet 1982-83With the addition of bassist Barbara Hogarth the group developed material with an art/funk feel and performed many headliners at the Jump Club, Crystal Ballroom and toured to Sydney. Strangely the quintet did not release a recording. However there are tapes of Live-to-Air performances on 3RRR FM including their final performance at the Crystal Ballroom.
After the dissolution of Essendon Airport, Chesworth continued performing as a soloist and with a new group entitled Whaddya Want? He later formed the instrumental group the David Chesworth Ensemble. Goodge, Cox and Hogarth formed the nucleus of the successful pop-funk band I'm Talking which featured Kate Ceberano as lead vocalist.
Reformation 2003-In 2003 a compilation CD was released on Chapter Music entitled Sonic Investigations of The Trivial, comprising live and studio recordings of the duo from 1978-1980. Following this release Essendon Airport have given occasional performances in their original duo guise. They perform their original music having painstakingly transferred the drum machine sounds from old tapes on to computer and have also added some new pieces. Graham Lee (ex-The Triffids) has been accompanying them on pedal-steel guitar. In 2005 the trio commenced recording for a new CD release .
Members
David Chesworth - keyboard, vocals (1978-1983, 2003- )
Robert Goodge - guitar (1978-1983, 2003- )
Ian Cox - saxophone (1980-1983)
Paul Fletcher - drums (1980-1983)
Barbara Hogarth - bass (1982-1983)
Graham Lee - pedal steel guitar (2005- )
From Wikipedia

NOTE: LINK HAS BEEN REMOVED AS THIS IS DUE FOR REISSUE IN THE NEAR FUTURE.
mutantsounds at 1:50 PM
Share