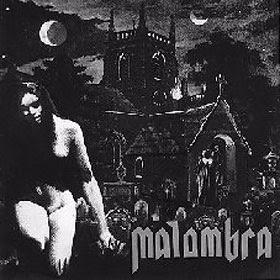 You may all have noticed that i really enjoy dark organ dominated LPs,in Jacula,Antonius Rex,etc. vein. One of the most representative labels of this genre is the Italian Black Widow records.This LP was released by this label in 1991 and is long sold out.Stunning dark atmosfear in Black Widow meets King Krimson guitarworks meets early Black Sabbath(!) jamming together with Jacula and Robert Smith or Peter Murphy on vocals. Anyway,some categorise it as black metal...i disagree,this is pure organ driven dark progressive music with some Black Sabbath hints. Searck within blog for Jacula,Antonius rex and other Black Widow records releases posted.

A band bio from Black Widow homepage:
"Based in Genoa and one of the historical acts of Black Widow Records, MALOMBRA has become an institution among non-commercial music fans since their first self-titled release back in 1993. Their incredible mix of gothic and darkwave influences, as well as progressive and avant-garde moods took an even more professional shape with the next "Our Lady of the Bones", which spread MALOMBRA's name world-wide and let the band start playing tons of live gigs. Led by the charismatic figure of the frontman Mercy, MALOMBRA passed a troubled period of radical line-up changes while the band worked to some tribute albums and side projects like IL SEGNO DEL COMANDO and HELDEN RUNE. Eventually new members were found and MALOMBRA started concentrating on their new opus, "The Dissolution Age", a modern come-back which will be an enthusiastic surprise for old and new fans!The long-awaited "The Dissolution Age" witnesses a deep change in MALOMBRA's sound, different from the past but still personal and recognisable. "If my band happened to turn foreseen, I'd rather shut it down" states Mercy, and voilà: the superb vocals by Mercy are supported by a wall of sound as never before by Roberto Lucanato and Francesco La Rosa, while the eclectic bass lines by Diego Banchero deal with the incredible synth-work by Franz Ekurn, which explores symphonic atmospheres as well as electronic and even EBM-oriented ambiences. With lyrics ranging from philosophy to politics, from religion to socio-cultural problems, "The Dissolution Age" is the perfect soundtrack for new millennium's decadence!"
get it here
mutantsounds at 12:23 PM
Share