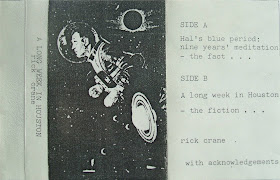 Absolutely fantastic and totally unknown first attempt by a guy called Rick Crane(not to be confused with the well known country-pop artist),who later released a couple of tapes for Colin Potter's ICR label in 1983(coming very soon).I think this one is from 1982. Floating space electronics ,experimental in some parts, that would really appeal to all Berlin school electronics fans.2 side long pieces, one totally instrumental , the other one featuring taped voices , inspired probably by the masterpiece movie "2001, a space odyssey".Absolutely stunning.Thanks Peter!
get it here
mutantsounds at 11:15 AM
Share