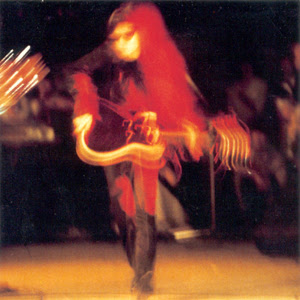 Lost Aaraaff's Lost Aaraaff (1971) was devoted to three improvised jams. Their young guitarist, Keiji Haino (3) penned the eastern mass Ama No Gawa - Milky Way (1973). Then, inspired by free-jazz master Takayanagi Masayuki, Haino formed Fushitsusha (2) to play improvised psychedelic jams. Starting with Live I (1989), 100 minutes of noise that ranked among the masterpieces of the psychedelic jam of all times, a bacchanal that vomited debris of Blue Cheer, MC5, Iron Butterfly, free-jazz, Grateful Dead and Jimi Hendrix, this prolific trio (originally a quartet) released monumental and dissolute works that seemed to know no limits. Fushitsusha (1991) and Hisou - Pathetique (1994) were among the follow-ups, but later releases such as The Wisdom Prepared (1998) and I Saw It (2000) were equally torrential. In the meantime, Haino was also busy with Nijiumu and Vajra. His solo albums included the galactic suites Affection (1992) and Execration (1993), and his boldest experiment, I Said This Is The Son Of Nihilism (1995). As the influences of LaMonte Young and Brian Eno increased, Haino arrived at Abandon All Words At A Stroke So That Prayer Can Come Spilling Out (2001), which contains a hypnotic piece for hurdy-gurdy and treated voice, and an industrial collage of metallic noises, distortions and ghostly vocals. His collaborations included Animamima (2006), with a twenty-piece sitar orchestra.


An early work by Haino Keiji, this was recorded in 1971 but apparently not released until PSF Records put it upon themselves. Consisting of percussion, piano and voice this flows along in an almost jazzy vibe although the occasional shrieks of Haino puts this in the experimental section. A good entrance point for those jazzheads that would like to investigate the sombre works of Haino.
mutantsounds at 5:39 AM
Share