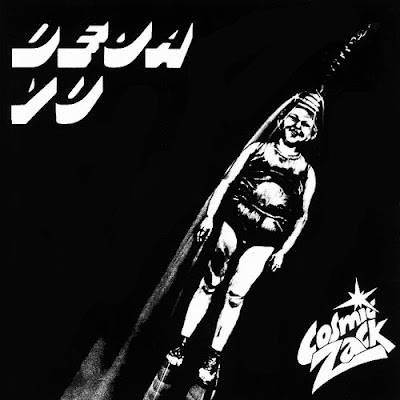 A very obscure release from Germany circa 1977. Typical of many private releases from late 70's Deutschland, Dιjΰ Vu attempt the Novalis style of progressive rock. The primary instrument is electric guitar and is accompanied by electric piano, sax, flute, bass and drums. There are also vocals with a traditional heavy Teutonic accent (some in English, some in German). I often wonder why these bands bothered with the vocals as it only detracts from the compositions. Fortunately, side two eschews the vocals for a more energetic instrumental approach. Musically, the band plays a safe, straightforward and somewhat jazzy (especially side 2) progressive music with some well done guitar/sax work amongst the otherwise mediocre compositions. File along with Credemus, Poseidon, Eden and a host of other well-meaning, but ultimately lacking, German bands from the late 70's/early 80's.

Tom Hayes
29-March-2001 for Gnosis2000.net
A rather good Kraut rock(?) album,although i have to disagree with the above review. The compositions are not that strong and original for sure,but mediocre?No not at all. It's an essential listening for all German rock fans, with many psych/space moments,which might be out of time at the certain period but imagine this released 6 or 7 years back of it's time!
get it here
Tracklist:
A1 Inner Voice 5:27
A2 Cosmic Zack 9:04
A3 Andy 7:27
B1 Annamaya 6:44
B2 Möwenflug 8:30
B3 Antonia 8:45
mutantsounds at 10:35 AM
Share